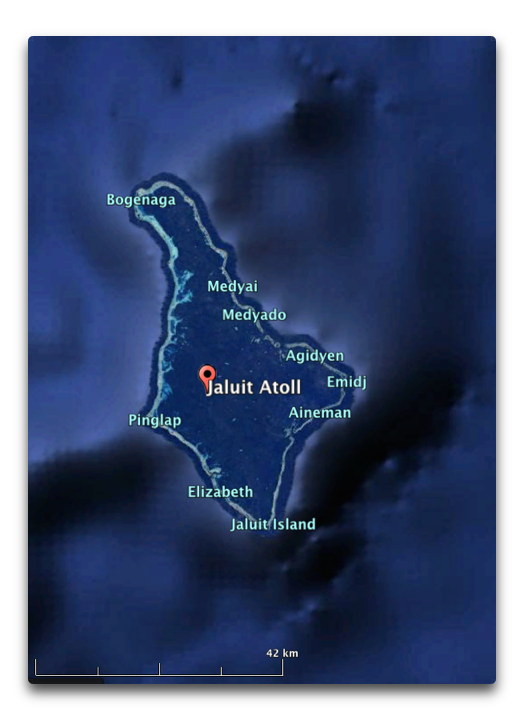 I’ve written before about the study of Arthur Webb and Paul Kench regarding the fact that coral atolls are not being swallowed by rising seas. Their conclusion in that study was that the claims of sinking atolls were contradicted by the actual measurements of the islands in question. The measurements showed the islands were mostly either growing in size or staying the same (emphasis mine):

The results show that island area has remained largely stable or increased over the timeframe of analysis. Forty-three percent of islands increased in area by more than 3% with the largest increases of 30% on Betio (Tarawa atoll) and 28.3% on Funamanu (Funafuti atoll [the main atoll in Tuvalu – w.] ). There is no evidence of large scale reduction in island area despite the upward trend in sea level. Consequently, islands have predominantly been persistent or expanded in area on… 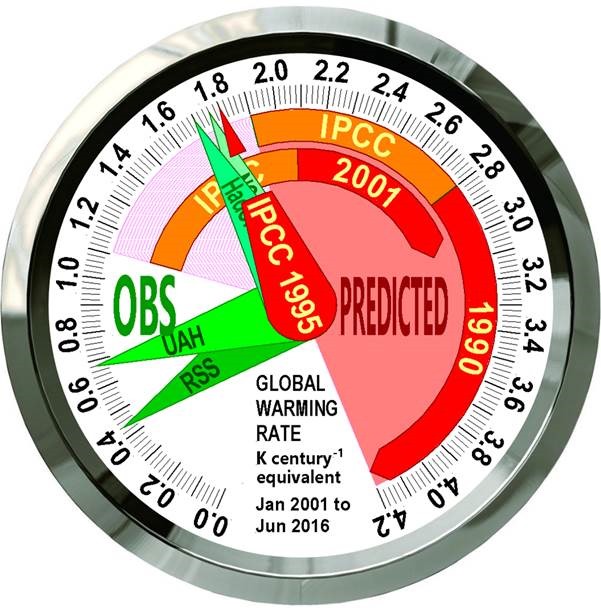 Yet another screaming Reuters headline, this time Earth on track for hottest year ever as warming speeds up, precedes yet another screaming, inaccurate, prejudiced Reuters “news” article about the totalitarians’ current hot topic.

http://sustainability.thomsonreuters.com/2016/07/21/earth-on-track-for-hottest-year-ever-as-warming-speeds-up/, written from Geneva, cites the World Meteorological Disorganization as saying the Earth is warming at “a faster rate than expected”. 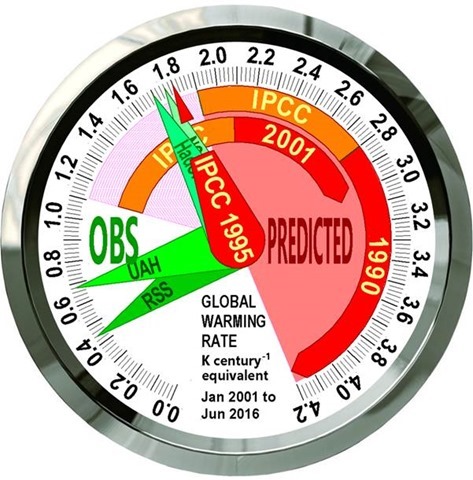 The Global Warming Speedometer for January 2001 to June 2016 shows observed warming on the HadCRUT4 and NCEI surface tamperature datasets as below IPCC’s least prediction in 1990 and somewhat on the low side of its 1995 and 2001 predictions, while the satellite datasets show less warming than all IPCC predictions from 1990 to 2001. Later IPCC predictions are too recent to be reliably testable.

All of the observations have been much affected by the recent el Niño spike, which may yet be followed…

My Figure 1 includes 3 maps from that webpage.  They are color-coded to show where and by how much surface temperatures have changed around the globe over three different 30-year periods, based on the GISS Land-Ocean Temperature Index (LOTI) data.  I’ve highlighted in red the respective global temperature changes in deg C.  They’re basically the same at 0.48 deg C and 0.49 deg C. You’ll note that I’ve also blacked-out the time periods, because I’ve asked the question Which 30-Year Warming Period Is Recent?

In a recently published paper (REA16),[1] Mark Richardson et al. claim that recent observation-based energy budget estimates of the Earth’s transient climate response (TCR) are biased substantially low, with the true value some 24% higher. This claim is based purely on simulations by CMIP5 climate models. As I shall show, observational evidence points to any bias actually being small. Moreover, the related claims made by Kyle Armour, in an accompanying “news & views” opinion piece,[2] fall apart upon examination.

The main claim in REA16 is that, in models, surface air-temperature warming over 1861-2009 is 24% greater than would be recorded by HadCRUT4 because it preferentially samples slower-warming regions and water warms less than air. About 15 percentage points of this excess result from masking to HadCRUT4v4 geographical coverage. The remaining 9 percentage points are due to HadCRUT4 blending air…